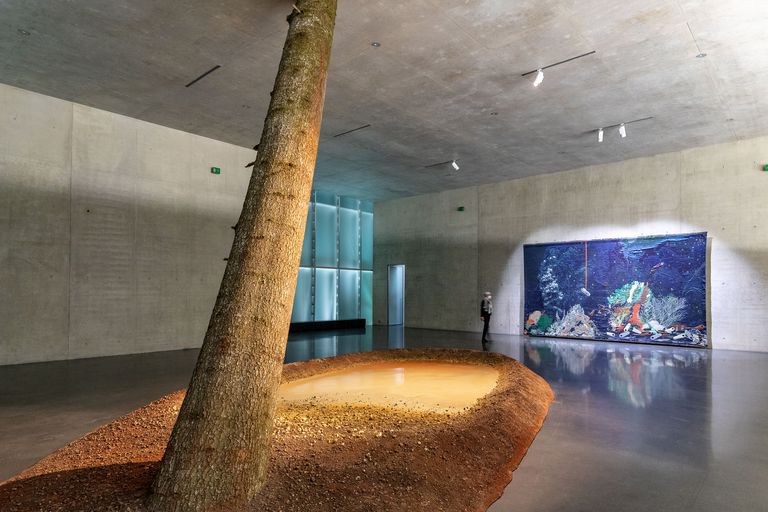 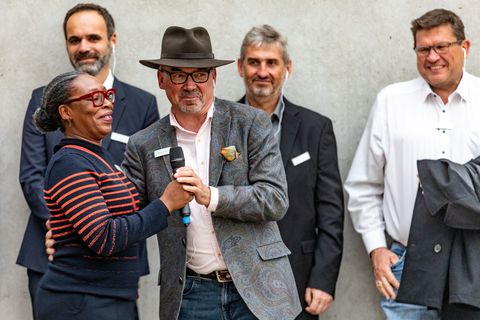 An exhibition by Otobong Nkanga at the Kunsthaus Bregenz shows: On weaving machines made by Lindauer DORNIER GmbH, not only functional fabrics and fashionable clothing, but also impressive works of art can be produced.

Normally, DORNIER customers weave – to name just a few – sophisticated clothing, shading or filter fabrics on their rapier weaving machines. But visitors to the Kunsthaus Bregenz can now also admire the artistic skills of the P2: Since October, four large-scale, brightly coloured tapestries have been hanging in the Kunsthaus, which is one of the outstanding exhibition houses for contemporary art in Europe. They were woven by the artist Otobong Nkanga, whose works have already been exhibited at the Tate Gallery of Modern Art in London. The performance artist, who made these fabrics especially for the huge concrete walls in the Kunsthaus Bregenz, wants to draw attention to the exploitation of nature by man. The carpets, distributed over various rooms, symbolise ocean depths, seasons and climate zones.

The P2 rapier weaving machine – "a long-cherished dream"
Nkanga's work is the first result of the cooperation between the "TextielLab", which is part of the "TextielMuseum" in Tilburg (Netherlands), and the Lindauer DORNIER. According to Hebe Verstappen, head of the textile laboratory, "a long-cherished dream has been fulfilled" with the acquisition of a P2 rapier weaving machine: It enables a wide range of applications opening doors to completely new technical possibilities for students, artists and designers to realise their textile ideas. At the same time, issues about sustainability, climate protection and resource consumption are becoming increasingly important. "As a value-guided family business, we highly welcome this development," says Florian Boch, Head of Central Marketing and Communication at DORNIER.

Christo’s last work realized with fabric produced on the P2
The tapestries are not the only one-of-a-kind artistic creation that has recently been produced on a P2 rapier weaving machine: The fabric for Christo's last work, the covering of the Arc de Triomphe in Paris, also came from the P2. A nephew of the late artist had commissioned a DORNIER customer to produce the 25,000 square meters of silver-blue textile specifically for the covering of the Arc de Triomphe. (Link to press release)

A public guided tour of the exhibition is planned for 29 January in Bregenz, followed by an exclusive visit to the DORNIER Technology Centre. (Link to registration)

Find out more about the exhibition at Kunsthaus Bregenz.