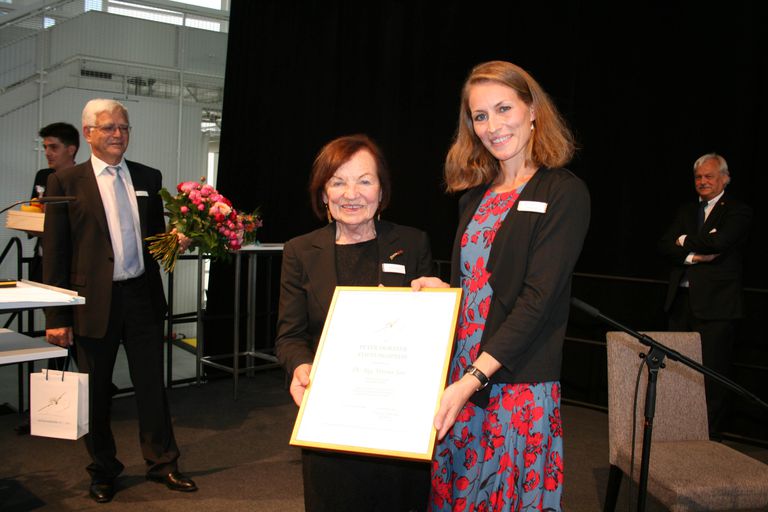 At the end of September, the Peter Dornier Foundation Prize was awarded for the very first time. Laureate Dr. Verena Jost received the award, endowed with 5,000 euros, for her latest findings on the production of biobased and biodegradable film. From now on, the prize will be awarded annually for outstanding scientific work with implementable ideas in the fields of textile technology, film technology and composites as well as aviation.

"The work proves the industrial feasibility of a completely bio-based and compostable packaging film made of polyhydroxybutyric acid-co-hydroxyvaleric acid", said Dr. Andreas Rutz, curator for the field of film technology, in his laudation at the Dornier Museum in Friedrichshafen. Dr. Rutz praised Verena Jost's dissertation, published in 2019. She is the first awardee of the Peter Dornier Foundation Prize, which could only be bestowed now after a one-year delay due to the pandemic. Her award-winning work deals with the prerequisites for producing bio-based and biodegradable film from biopolymer poly(hydroxybutyrate-co-hydroxyvalerate) (PHBV) as a substitute for petroleum-based film products.

As impermeable as polyester film
The major challenge with biopolymers in film production: since they do not have optimal film properties by nature, they have to be enhanced with all the features that distinguish conventional, petroleum-based packaging films for food protection. It took Ms. Jost at the Fraunhofer Institute for Process Engineering and Packaging (IVV) in Freising, Bavaria, about nine years to find the right additive that could compete with classic film: A two-layer film made of PHBV with an alginate coating, produced on a flat film line. Tests quickly showed that permeation through the "green film", i.e. the permeability of the material for oxygen and water vapour, is at least as low as with conventional polyester film. "This is a surprisingly low permeability for a biopolymer," said Verena Jost in her speech at the award ceremony to the approximately 40 present guests.

Vision for the future: film from food waste
Ms. Jost very consciously decided to use PHBV. The material from the thermoplastic polyester group is already known as a packaging material: As early as 1975, the first biodegradable shampoo bottle was made from PHBV, but until now the biopolymer has not been able to establish itself on a large scale. According to Ms. Jost, this is mainly due to its complex manufacturing process. PHBV is produced by various microorganisms, including waste streams from beer and olive oil production. Compared to the well-known biopolymer polylactide (PLA) obtained from maize, which is processed into special films, for example, PHBV has a decisive advantage, according to Ms. Jost: There are studies showing the production of PHBV from municipal waste. "Since the material can be processed thermoplastically, it can also be recycled, permitting a circular process," explains Verena Jost, who is currently working as a packaging development scientist at baby food manufacturer Hipp. Ms. Jost therefore advocates continuing to optimise the extraction process of PHBV within the framework of further research and development.

Marketability right from the start
In order to facilitate the market launch of the new development, Ms. Jost says that from the very beginning she made sure that the PHBV film could be processed on classic equipment such as the lines produced by DORNIER. On these lines, customers in Asia and Europe produce not only packaging film for food, but also special films for smartphones, solar cells and batteries for electric cars. New production plants processing the biodegradable packaging film made of PHBV would require adaptation to the material and optimization of downstream processes "However," Verena Jost points out, "more research is needed on the material." For example, the migration properties, i.e. the migration of substances from the packaging material into the food, must be investigated. In addition, PHBV is relatively brittle. So far, it has been processed as unstretched cast film. In order to withstand the enormous tensile forces with which films are brought into shape on the up to 150-metre-long stretching lines, the processing properties of PHBV must be further optimised.

Sustainable film: True to the spirit of the founder Peter Dornier
For laudator Dr. Rutz it is clear: "The work awarded today is an essential milestone on the way to producing sustainable film on an industrial scale." As a machine and plant manufacturer, it is one of the focuses of research and development at DORNIER to accelerate this development process. In her speech, Maja Dornier, Chairwoman of the Peter Dornier Foundation, also commemorated the founder of Lindauer DORNIER GmbH: Peter Dornier (1917-2002). The prize, which in future will be awarded annually to young people in recognition of outstanding scientific findings and practical achievements in the field of technology, is based on one of his ideas. "Reducing environmental pollution with the help of biodegradable film would have been a goal entirely reflecting the founder’s spirit," says Maja Dornier.